We make the pipe so you won't have to.

Standing the Test of Time

It's true, we're not monstrously huge like one of our competitors, but we've been around for a long time. Many would say we've stood the test of time. In fact, documentation shows we've been around as early as 1917. Back then, it was all about offering the best quality product and receiving a handshake of satisfaction from every customer that walked through our door.

Many of the same principles practiced in our business nearly 100 years ago still hold true today. The results are evident when you look closely at our company growth during the last 7 years. At the end of fiscal year 9/1997 to the end of fiscal year 9/2006, Shope Concrete Products Company grew an impressive 320%. We believe this figure reveals a lot about our customer service, the quality of our products, and our ability to compete in any economic environment.

We're currently retrieving old photographs, documentation, and various artifacts, revealing an historical view of Shope Concrete Products successful past. All information will eventually be displayed on this web site. Think of it as a "Shope Museum" of sorts. You'll see how Shope went from a small block shack next to a dirt road, to today's 14 acre yard & production facility.

If you have some knowledge about our history prior to 1965, a story to tell, or some facts to correct or share, please contact us. We'd love to hear your story.

A Snippet of History

On a cool and rainy fall day in 1964, founder John Henry Pattee stumbled upon an old and tattered file folder. Inside, John found an invoice showing a brick sale to a local customer and in the upper left corner, a year date of 1917. That's just six years after postal home mail started being delivered in Puyallup for the first time. The company name is missing from the invoice, but many speculate the company name on the invoice never printed until the following decade. The earliest invoice document we've been able to find in print displays a date of January 30th, 1920.

Back then, Shope was known to Western Washington as "Puyallup Shope Brick" which carried this name until the mid 1960's. In 1964, Shope was purchased by John Henry Pattee, and later incorporated in 1965 as Shope Enterprises, and still doing business today as Shope Concrete LLC, a Travis Industries company. 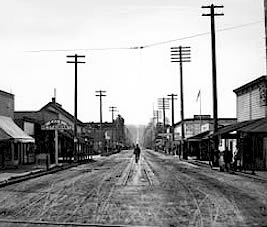 As Shope Concrete was just opening in Tacoma during 1920, this is how the main street in downtown Puyallup, Meridian Street looked..

Back in the day, product delivery was hard work, especially without an hydraulic boom or lift. In the photo displayed at the left, Puyallup Shope Brick Company shows off it's 6 ton load of building tile, all loaded by hand. Once the 6 tons of tile were delivered to the jobsite, you guessed it, each and every tile was offloaded by hand. Fortunately today, Shope has more than hands to load and offload concrete products.

Shope Aerial View taken in 2004 prior to the new wet cast building constructed in 2008.

Located in Fife Washington, This company has very little information other than it is a contractor. Here is the facebook page.

Rogue Valley Precast is here to be the preferred supplier of precast concrete products of Southern Oregon. We offer quality work, an efficient process, and helpful customer service - all while being environmentally friendly.

All Contracts Derek has

Had to get risers for our septic tank. Everyone at Shope's was very helpful and friendly.